I made these photographs over a decade visiting Peru, my father, friends, traveling on assignment. It was a window to the world hidden in plain sight, frequently overlooked by tourism. Peru’s empleadas – the domestic engine which makes Peru and South America so comfortable for those able to afford the human luxury. You can see the work larger on my website here.

By the time you are reading this I will be in Arles. I know! Hence, bon jour from Arles – Looking forward to a week of photo inspiration and tribalism. I’ll be brief:

I worked on an update of my east of the Anacostia River project, The Invisible Wall, that was thoughtfully edited by the good people at Politico Magazine: here. 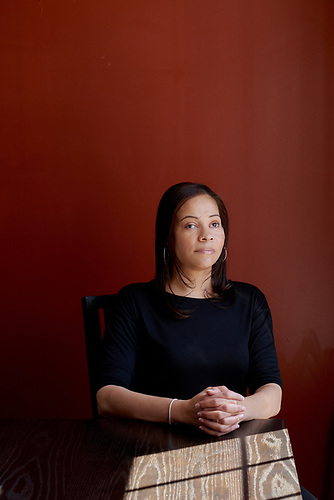 Star Myles, who with her three girls, makes a new life which includes advocacy work for domestic violence survivors after she was shot in the head by her husband for Cosmopolitan. You can read hers and other survivors’ stories here. I was honored to share a part of this great initiative with Cosmo Magazine. It’s not Helen Gurley Brown’s Cosmo anymore!

My work is on exhibit at the Annenberg Center for Photography along with a number of other talented photographers whose work is included in the group show “Not an Ostrich: Selections from America’s Library.” The wonderful Anne Wilkes Tucker curated this selection from the holdings at the Library of Congress. Please check it out if you are in LA.

If you have any Paris recommendations- I’ll be there after Arles – please send my way. Looking forward to a productive and joyful summer when I return from this brief continental sojourn. Wishing you the same!

Things are moving forward! I’ve filed my taxes (early!). I’ve finished a third version of my book maquette, Precious Stranger, which combines my own contemporary photographs of Peru with family archive (a secret trove of letters from my father, a ne’er before seen wedding album, etc) to create a family album of a magical kingdom that never was but might be. For Instagram I am including more archival material and less of my own photography to share with you a deeper backstory than I elucidate in the book.  If this speaks to you, please follow along as I retrace the mystery of my history. Next, I’ll be putting together a proprietary website.

I’m heading to NYC for the NYTimes portfolio review on Saturday and then the DF with one of my great friends to celebrate our mutual birthdays in Mexico next Saturday.  If you’re going to be in either of those two locales and want to hang out – drop me a line.  Oh, and it’s Spring! Onward!!

I’ve spent my free time this summer and early fall finishing the book dummy for my monograph, Precious Stranger, a very personal work, which I look forward to sharing with you soon.

Now I will be able to return to my ongoing project, The Invisible Wall, which examines life and urban development east of the Anacostia River in Washington, DC. A selection from this project was recently acquired by the District of Columbia’s Art Bank Washingtoniana Collection.

I will be speaking on this work during Fotoweek DC on Saturday November 12, 2017 from 2-3 pm at the Mexican Cultural Institute (Fotoweek Central). I’d be delighted if you are able to join then.

Last month, I received news that I’ve been honored with an Artist Fellowship for the third year, by the DC Commission on Arts and Humanities. The fellowship is no-strings attached and recognized the individuals whose artistic achievement contributes to DC’s as a cultural capital city. I am grateful to be recognized with and provided support by my home community.  I will be using the funds to assist the completion of the Precious Stranger.

Tangier Island was in the news this summer because despite ongoing erosion that threatens the future of the island’s residents, the mayor of the heavily pro-Trump island does not believe in climate change.  I was pleased to visit the Chesapeake Bay island for Le Monde Magazine, where I spent a few days with Mayor Eskridge, accompanying him to “The Situation Room” where “all the world’s problems are resolved every afternoon,” according to the mayor.

A deep sense of community informs the citizens of Tangier Island who often stop in the roadway to chat in afternoons after the days work on the water is done. Few cars are on the small island, but almost every house has a golf cart parked in front of it for easy transportation.

Some of my favorite assignments are those that seem light-hearted, but reveal deeper issues.  Such was the case when the call from Politico came to photograph “Cooter’s Last Stand, ” in Luray, Virginia. The event is a celebration of the famed 80’s television show, The Dukes of Hazard.”  Drawing thousands from all over the world, the controversy involved the show’s glorification of the “General Lee,” a 1968 Dodge Charger with a Confederate flag emblazoned on its roof.

The crowd at the finale when the original cast of Dukes of Hazzard gathered onstage during “Cooter’s Last Stand,” an event that reunites the cast of the television show “The Dukes of Hazard,” which celebrates Southern pride and hosted by Ben Jones.

Both opening next year, Southbound, developed by curators at the Halsey Institute for Contemporary Art in Charleston, SC, will feature 56 contemporary photographers’ vision of the new south. Not an Ostrich is the work of Museum of Fine Arts Houston Curator Emeritus Anne Wilkes Tucker, who spent weeks culling through the Library of Congress’ archive to assemble the photographs that will appear in this show.

Southbound: Photographs of and about the New South, Halsey Institute of Contemporary Art, Charleston, SC

Not an Ostrich and Other Images from America’s Library, Annenberg Space for Photography, Los Angeles, CA

I wish you a happy and productive autumn and I hope our paths cross soon.

A very exciting political event is coming to fruition in Washington right now.  I know what you all are thinking, so I will do away with the suspense and just confirm that yes, the exciting political event of the summer in Washington is happening at the American University Art Museum June 17. I am of course, talking about Performing the Border curated by Megan Rook-Koepsel at the Alper Initiative for Washington Arts.

For those of you who live in the DMV and don’t know – the Alper Initiative for Washington Arts is promotes an understanding and appreciation of the art and artists of the Washington Metropolitan Area through a dedicated space located within the American University Museum, and exhibitions, programs, and resources for the study and encouragement of DC’s creative community.  They also host a reading room related to each exhibition.

Perhaps most exciting is that early inspirator Carl de Keyzer will be showing in the main gallery and giving an artist talk at 5 pm before the opening, this is a real opportunity, folks.  De Keyzer’s work was a huge personal influence back in me formative years – his way of looking at the world without relying on the same set of tropes I saw repeatedly foregrounded.  Also the fat rectangular format. And flash. No illusion of sentimentality or false intimacy.  He won a Smith? grant and travelled around the US in a van or something with his family photographing God, Inc. and continues to produce fantastic work – his recent work from Cuba for ex. Also because his pictures are so small on his website and also because, website, the opportunity to see the prints in person should not be discounted.

So come to see this work, here his talk, and see this fabulous group show I’m in with a bunch of other interesting DC artists: Clay Dunklin, Amy Lin, Jenny Wu, and Street Light Circus. The works in Performing the Border explore the concept of borders and boundaries, both the ways we perform within them, and the way those borders are often themselves a performance. Looking forward to seeing you there.

Alper Initiative for Washington Arts/American University Museum at the Katzen

Free parking in the garage

The path of love is not the path the comfort, Creina Alcock wrote.  And so we begin this year in a state of extreme discomfort, most of us, it seems to me.

I am thinking of my intentions this year, more acutely knowing that which I have taken for granted was not, in fact, guaranteed, and that time is the devil lulling me into a false sense of security, to linger at the party and sleep the days away, because tomorrow always comes.

Until it doesn’t. In 2017 I want to learn how to live every day like it was my last, which I have to thank the current administration here in town for helping me to visualize more viscerally.  So there’s that.

I’m going to try to slow down and pay better attention this year. Conquer the egoic anxiety that is always telling me I am not doing or being enough. I would like less shallow and more meaningful engagements. Less electricity and more papyrus. Embrace the troglodyte within unapologetically.

I also went down to the National Mall on Inauguration Day and for the Women’s March on Washington and made some photographs with my old crown graphic because I think that is how its going to roll this year and I better start now. I have big plans for this year and I hope you’ll follow along, or we’ll meet in the offline world and have a great conversation.

Back to Creina Alcock, she lived among the Zulu in  South Africa, and she had this to say about rupture and reconciliation, words which might serve us now:

“The path of love is not a path of comfort. It means going forward into the unknown with no guarantee of safety, even though you’re afraid. Trusting is dangerous, but without trust there is no hope for love, and love is all we ever have to hold against the dark.”

Its the last call for the Loves & Fears Project at 2208 MLK Avenue SE!

In conjunction with the openings at the Anacostia Arts Center down the road, I’ll be hosting the last studio hours this year to participate in the project.  It has been really wonderful having a chance to set up shop in the community and get to know you all.  I hope that those of you who have passed and by and thought about participating will do so, and that more urban adventurers will use this as an opportunity to cross the great boundary channel that is the Anacostia. Treat yourself!

Loves & Fears is a community project which asks people to share their loves and fears, then sit for an accompanying portrait. The work is printed and posted around town, and will be used for publication and social media sharing.  All participants will be emailed a copy of their portrait and text.

This project was sponsored by the Anacostia Arts Center with support from the National Endowment of the Humanities.